Talk about other toys we collect.
Post Reply
12 posts

So, this is Winter Bramble (you can click through for a better look at the images, but Picasa has mangled the super-hi-res version a bit): 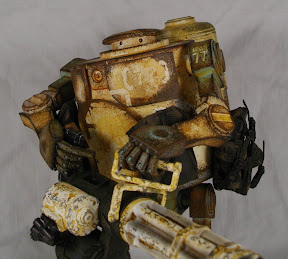 Not shown is that Bramble's got a snowflake painted on top of his head. Winter, remember?

Bramble's very articulated, which can make him fairly expressive for a dude whose face consists, in its entirety, of two recessed dots for his eyes. 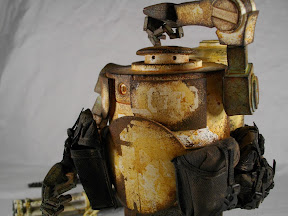 His knees and elbows are restricted hinges with perhaps ninety degrees of motion, but his hip, shoulder and ankle joints are ball joints. The wrists allow rotation, but not much else. The wrists also look a tad fragile, so do be careful. Bramble's head also seems to be on a ball, so he can look in any direction around him, with some up and down motion as well. Finally, he has a joint in his midsection which will allow the upper body to be rotated some way to either side, restricted mostly by the enormous ammo container on his back bumping into his bags or the hangers for same. Each of the fingers and the thumb have three joints: with the exception of the point where the thumb meets the hand, which is a tiny, tiny ball joint, these are all hinges.

Several of Bramble's joints will be stiff, and I'm not sure how much abuse his plastic will take, so be careful when posing him.

As you can see above, he comes well-armed, but only with the enormous minigun. His pouches and bags (the large bags hanging from back seem to be modeled on ALICE packs, FWIW) are made of actual canvas, and appear to feature working plastic fasteners to keep the pockets closed. You may want to find some inert to stuff in them, however, as they will probably come partially collapsed from being packed in the box. Additionally, the bags and pouches will be an ever-loving pain to get on their hooks. One the bags on mine still falls off if you look at it funny. 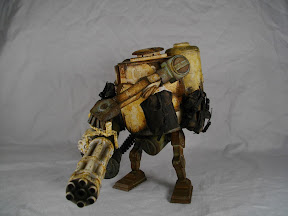 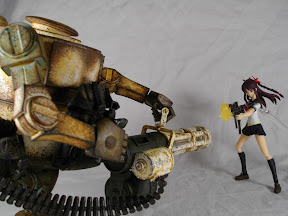 (Any of the images below can be clicked on for embiggenation,[0] if desired.)

I ordered a couple of WWRp Berties, which came in a couple weeks ago. I've been slackerly about getting this post up.

So, for comparison, here's a pic of Bramble with Dirty Deeds Bertie. 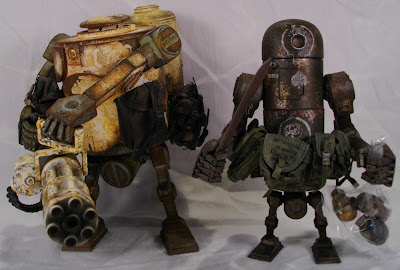 I'm not sure it's clear, but Bertie's quite a bit smaller than Bramble: a little shorter, and a lot less bulky. Their hands and legs are very similar, with Bertie's being scaled down from the ones on Bramble, but otherwise identical. Bertie's got a bit less articulation, owing to the way his head is mounted. While Bramble's manhole cover cranium is mounted on a ball joint, Bertie's is mounted on a swivel.

Bertie's pouches are also on a belt, instead of being hung directly from hooks around the body. We'll come back to that in a moment.

The World War Robot bots all seem to come in a veritable multitude of paint schemes. I only bought two, because, while they're neat, I'm not actually made of money (whatever my profligacy might lead one to assume).

Each Bertie also comes with a Cube robot, in part, I assume, to make up for the lack of mass relative to Bramble. Each Cube is painted to match the Bertie it accompanies.

Sandy [redacted] Bertie is in brown and tan desert colors. 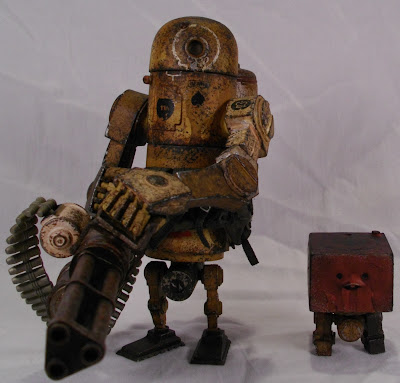 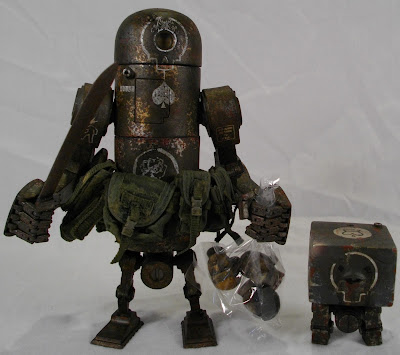 Most Berties will be equipped like Desert Bertie or Bramble: minigun, ammo belt, pouches, and large ammo canister on their back. The Dirty Deeds guys are a little different, and come with a machete, and a baggie of heads. 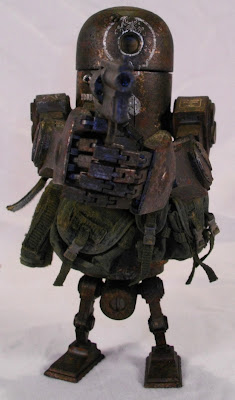 And a pistol. Mustn't forget the revolver. (The cylinder rotates freely, actually.) The belt o' pouches that Deeds is equipped with is slightly different, to accomodate the revolver with a holster. As with Bramble, the pouches and belt are canvas, with plastic hardware (Deeds' holster uses velcro, FWIW).

I do have a couple complaints. Both of my Berties seem to be missing a belt loop (I couldn't get a good picture of this). It seems to be the same loop, so it may be intentional. One of Desert Bertie's is mashed such that it's practically unusable: 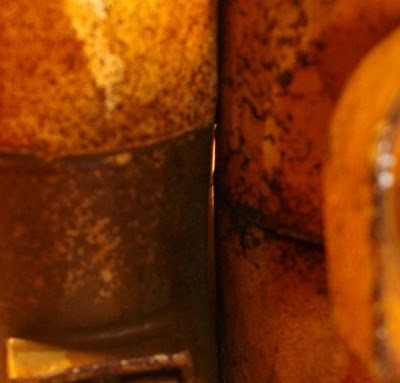 This seems to drop the belt far enough in the back to accomodate the huge ammo canister, so this might also be intentional, I'm not sure. However, I'm pretty sure this is a manufacturing defect: 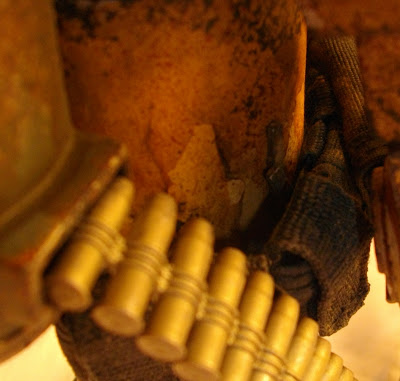 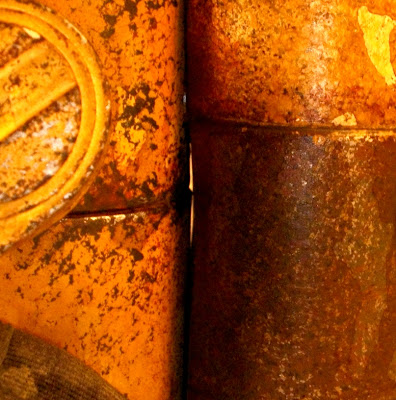 That gap there is because the ammo canister appears to have deformed some during manufacturing. None of the problems are serious enough to want to ship stuff back to maybe be replaced if there's remaining stock, but it's something to look out for.

ETA: one complaint: a mesh bag (or something) for Dirty Deeds Bertie to tote his head collection around in would have been nice. The plastic baggy doesn't look right, but I don't want the heads laying around loose, either.

Um ... Also, Cubey is a little creepy. And he keeps staring at me. 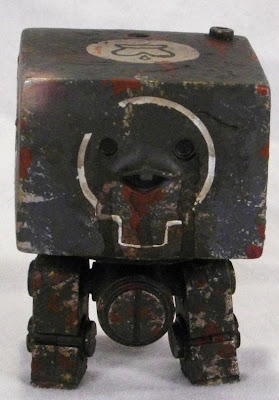 0. What? It's a perfectly cromulent word.
Top

i'm interested with this WWR series , know where can i get one?

They're limited-run, it seems. Looks as though they're handled through multiple online retailers, but once they're out, you're stuck checking auction sites. ThreeA also has an online store (Bambaland) they run some stuff through, but I've never seen any figures actually for sale there. YMMV.
Top

I let myself get bit finally, waiting on a Mr. Frosty Large Martin to turn up... I'm warming up more and more to Armstrong, may try and get the Mod 7 Armstrong...

Large Martin is nice and beefy. I just noticed he's the same unit as your winter bramble, Canthros, down to the snowflake on his head! =o

Mom likes Martin, too. He's "cool as hell" in her own words.

His hip and ankle balljoints are really tight, though. Kinda scary.
I've got stuff on Shapeways! Check it out!
Top

edit: clearly my brain has but one track.
I've got stuff on Shapeways! Check it out!
Top

Large Martin. I think you might have Armstrong on the brain, Xehn.

Return to “Other Toys”